"A Ray Of Sunshine"


From a speech delivered by Jack - a store owner who Nosson visited every Friday on Mivtzoim during his year in Los Angeles - at a gathering in honor of Nosson’s Shloshim in Yeshivas Ohr Elchonon Chabad. We would like to thank Jack for coming to inspire us and comfort us with his memories of Nosson. 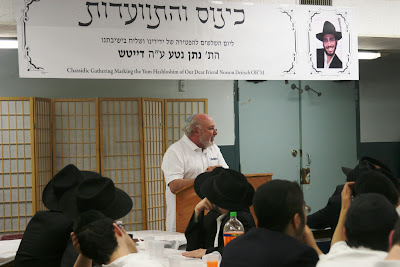 I own a trophy and award store in Northridge, California. Fridays are always very busy day for us and we sometimes lose sight of where we’re at – how our feet are really firmly planted on the ground… and the realization came whenever Nosson would come in and we would spend a half hour learning about and understanding what life was really really about. He was in essence my sunshine for many many weeks and years. We had a very very good relationship and – knowing him – I can unequivocally say that I became a better Jew just by being close to him.
Ironically, for the last couple of months I had been trying to get hold of him, and as well as I knew him, I never knew his last name. So I asked Rabbi Rivkin, “you know this fellow who would come by, and we would learn, and we would laugh, and we would drink” – I still have a bottle of Smirnoff that’s half filled that we would have L’chaims with…
Ironically I asked Rabbi Rivkin, “My son, G-d willing, is getting married in August and I very much want my friend Nosson to be there…” because my son is getting married in Miami and we’re spending Shabbat there at the Chabad house, and I knew that Nosson was the Mashgiach there.
Oddly enough on Lag Be’Omer some Chabad boy’s came over to my homage to my mother-in-law who had passed away, so I asked “where is this young man?” Later I learned tragically that he had died just a half an hour before I had asked where he was.
He was really a ray of sunshine…
I remember one time, when I had a friend that came in that was not religious at all, and Nosson of course would ask every Jewish person that came in, “Have you ever put on Tefillin?” or “Did you put on Teffilin today?” and the man said, “I’ve only ever put on Teffilin once in my life.” So Nosson says “Well, we’ve got to put on Tefillin…” and the gentleman looks at me, and I said “You’ve got to listen to the Rabbi! This kid’s a Rabbi, you’ve got to listen to him!”
So Nosson gets the Teffilin on him and we’ve got these two young men there with beards and black hats, and just then a lady comes in and she says, “Well I’ll come in tomorrow to pick up my trophy.”
I say, “I’m sorry we’re not open tomorrow, its Saturday.”
“Why?” she asks “are you Jewish?”
I say “No, we’re Seventh Day Adventists!”
I mean here’s a kid with Teffilin on and we have Chabad Rabbi’s here… …and Nosson just cracks up!
So I said “I’m sorry, I didn’t mean to offend you, but it’s pretty obvious that we’re not Hindus here, young lady…”
There was always laughter with Nosson around. Even though he was a red-sox fan, which was probably – unfortunately – his biggest fault, we very much enjoyed our relationship.
I look at a person like Nosson and I think to myself, “This boy has accumulated, in the short twenty years of his life, more wise words, more words of Torah and more words of Thought, than I would probably accumulate in two or three hundred years…"
It was an honor knowing him…
Ironically, my son is getting married in two months from now and we’re staying at the Chabad House where – I believe – Nosson would have been… I just wish he would be there and I am sure that he will be there.
Thank you.
at 8:52 PM